Lion Rock (獅子山) may be the most iconic of all peaks in Hong Kong. The primary feature of one of the oldest country parks in the city, the hill gets its name from a rocky outcrop shaped like a crouching lion, poised regally 495 meters on a sheer escarpment overlooking Kowloon.

Over the years Lion Rock has come to symbolize the “can-do” spirit of the Hong Kong people. If you ever get the chance to watch RTHK’s popular 70’s and 80’s television series “Below The Lion Rock (獅子山下)” you’ll have an idea of its symbolism, especially for predominantly working class Kowloon. Its theme song is practically Hong Kong’s anthem.

The mountain’s significance was not lost on the 2014 Occupy Central democracy movement when some intrepid protesters climbed the peak and unfurled a massive yellow banner demanding universal suffrage. The banner was promptly removed by the police shortly after, but already images were broadcast all over television and social media. However you feel about the protests, kudos to those who climbed, carried and hung that huge banner up the mountain – no easy feat. Read more about the symbolism here. 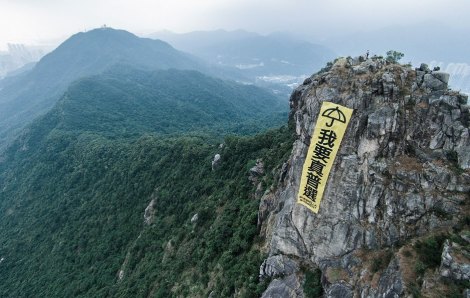 High on my list of must-do hikes in Hong Kong, I was finally able to mark this summit as done last weekend. Hot and sunny weather would guarantee a challenging hike, but also promise great views from the top.

There are a number of ways to approach the mountain, so we chose a convenient starting point at Wong Tai Sin MTR station. After an uphill walk we soon found the trailhead and left the bustling streets of Kowloon behind us.

The Lion Rock perched over Kowloon is clearly visibly from Wong Tai Sin.

Heading uphill on a side street, we pass by a monastery and temple.

Halfway up to the peak, we got a taste of the view awaiting us. The mountain on the left is Kowloon Peak (Fei Ngo Shan).

The trail was was steep and paved with stone steps. By the time it connected with the Maclehose Stage 5 trail, we were completely drenched in sweat. This is one hike where you want to bring plenty of water.

A bit further on Mac 5 and you’ll soon see the signs for the side trail to Lion Rock. We approached the peak from the lion’s “tail”, and made our way to its “head”. There were a lot of people on the peak this weekend, likely due to the clear weather. The view over Kowloon peninsula was breathtaking – well worth the effort.

At the summit. The Lion has been tamed!

Stunning view of the entire Kowloon peninsula below Lion Rock.

Over the northern side of the ridge, Sha Tin town.

The sheer escarpment that is the “head” of the Lion Rock.

A look back at the tail end of the lion.

To truly master the Lion, climb onto the biggest rock on its head!

A rock perched precariously on the trail. 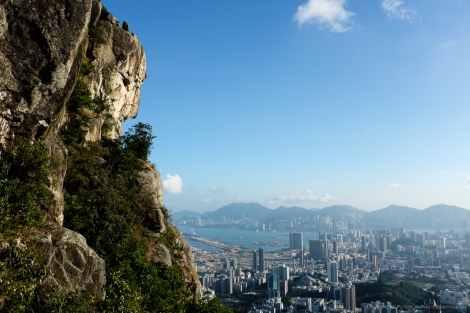 The face of the lion watching over Hong Kong.

After descending from the escarpment we continued on the Maclehose trail for a while before heading north towards Sha Tin via Amah Rock, another famous stone structure in Hong Kong.

The natural stone sits on a small knoll, and from a distance looks like a woman carrying a child on her back. The legend goes like this: the faithful wife of a fisherman climbed the hill every day with her baby son, waiting for her husband’s return, not knowing he had drowned at sea. The Goddess of the Sea took pity on her and turned her into stone so that her spirit could be united with her husband. What a touching story!

Up close to the natural statue. 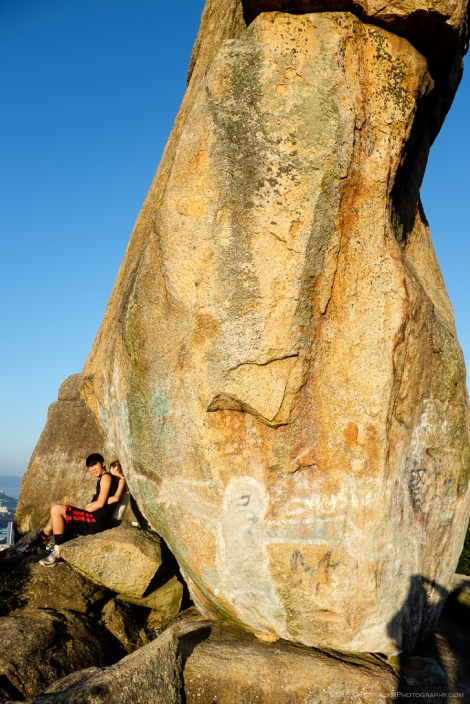 Relaxing in the setting sun. 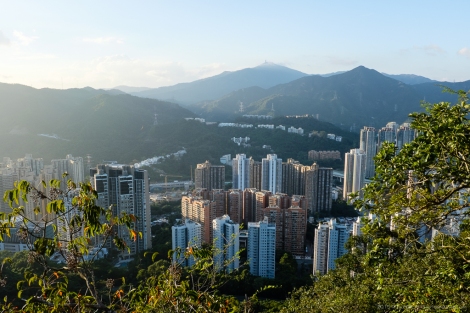 3 responses to “Taming the Lion Rock”