The city of Hiroshima will forever be associated with the dawn of the atomic age. Today, this urban centre is a vibrant, modern metropolis and it is hard to imagine the area was utterly destroyed by the world’s first nuclear bombing at the end of World War II. While rebuilt in typical Japanese urban sprawl, there are many reminders of its history and legacy scattered throughout the city. Here are a few photos from a recent visit. 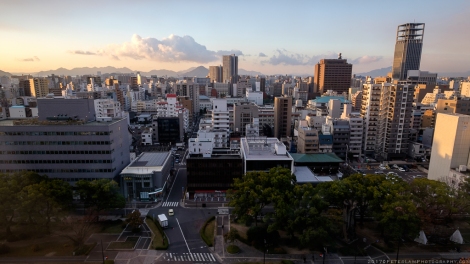 On August 6, 1945, 80,000 people perished in an instant, while another 70,000 died in the aftermath due to burns and radiation sickness. Three days later, a second bomb was dropped on Nagasaki, destroying the city and killing another 80,000. Most of those who died were civilians. No visit to Hiroshima is complete without a sobering visit to the Peace Memorial Park, in memory of those who lost their lives in the world’s first, and so far only, nuclear attacks.

The park draws over a million visitors annually, and is comprised of a number of museums (the Hiroshima Peace Memorial Museum being primary) in addition to many monuments and memorials. It also serves as a remembrance of the horrors of nuclear war and a strong advocate for world peace.

At the north end of the park, the A-Bomb Dome “Genbaku Dome” is what remains of the Hiroshima Prefectural Industrial Promotion Hall, the building that stood closest to the hypocenter of the explosion. The skeletal remnants are a powerful reminder of the total destructive power of such weapons, and is a UNESCO World Heritage site.

The Eternal Flame with the Peace Memorial Museum in the background. 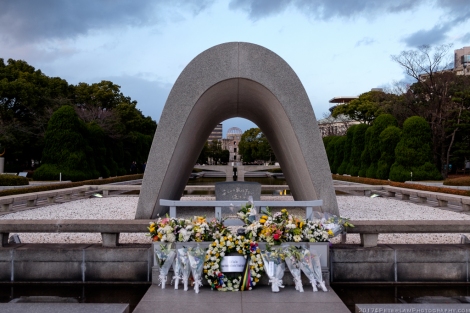 The Memorial Cenotaph in remembrance of the victims of the atomic bombing. 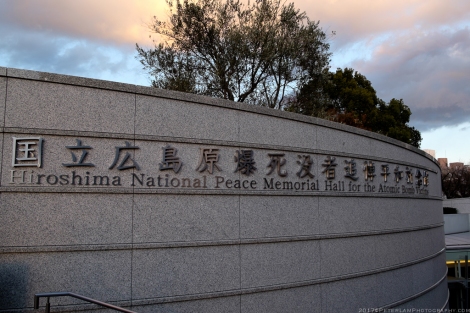 Facade of the Memorial Hall.

Paper origami cranes (orizuru), are sent to the park from around the world. The story of bombing victim Sadako Sasaki is well known. 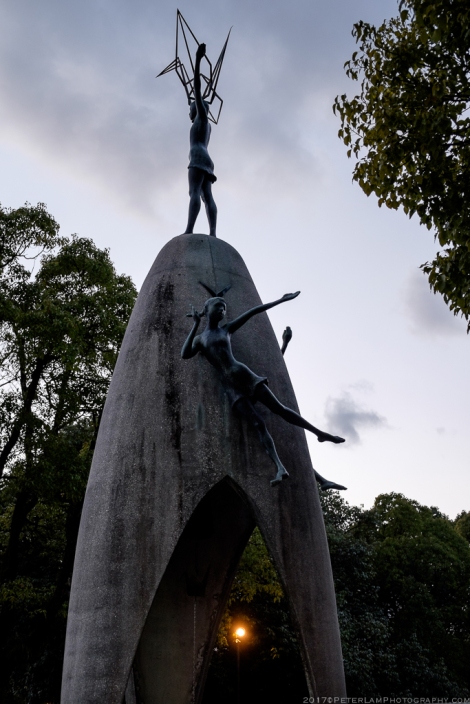 The Children’s Peace Monument in memory of the children who died.

Students on a school trip to the Memorial Park.

A reminder of the horrors of nuclear war while hoping for peace.

Originally constructed in 1589, Hiroshima Castle (also called Carp Castle) was the economical and physical center of the city during feudal Japan. Its main keep is five stories tall, and its grounds are surrounded by a moat. The castle was destroyed by the atomic blast, but the facade rebuilt in 1958 and the building now serves as a museum of Hiroshima’s pre-war history. 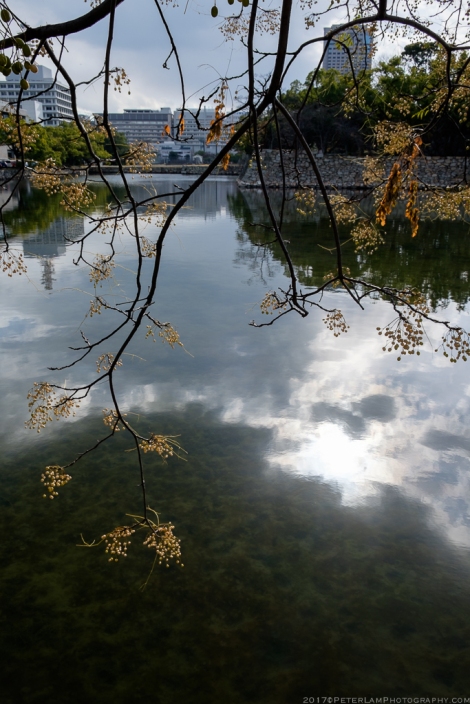 Part of the moat that surrounds the castle.

The front facade of the castle.

View from the top tier which doubles as observation deck.

The carp fish is the official symbol of Hiroshima. 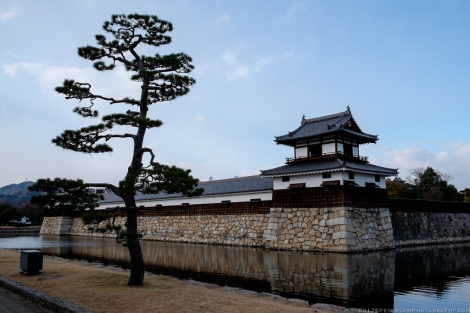 Located near the castle, Shukkei-en is a historical garden that was built in 1620. The garden displays many features of the traditional aesthetics of Japanese gardens, including miniature representation of mountains, valleys, and forests in the landscaping. The entire garden is connected by a path which winds around the pond at the center of the garden. 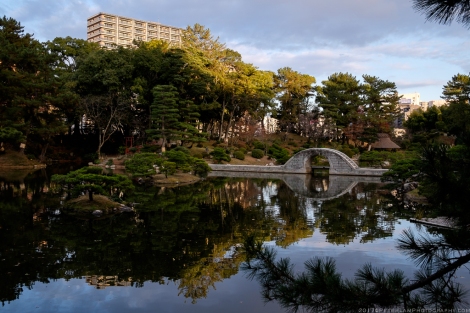 The Rainbow Bridge at Shukkei-en. 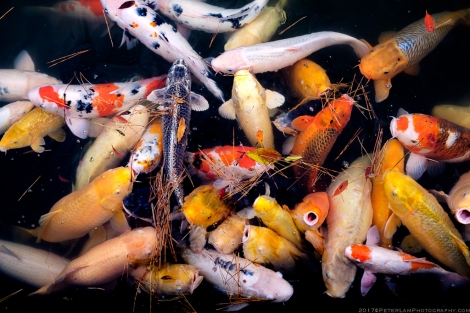 Lots of koi fish (coloured carp) in the garden pond.

Wishes for peace at Hiroshima Prefectural Art Museum, located adjacent to the garden. 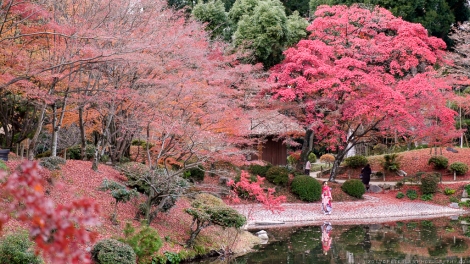 An unseasonably late fall at the garden.

The Orizuru Tower is a relatively new addition to Hiroshima’s tourist attractions. Officially opened in September 2016, the 50 meter tall mixed-use office building is located next to the A-Bomb Dome and one of the few towers that offer a great view of the Peace Memorial Park and an aerial view of the Dome. A souvenir store and various restaurants occupy the main floor.

The open-air observation deck is best appreciated at dusk, when the city is lit up below and you can enjoy a hot chocolate in the cool night breeze. They even provide fleece blankets if it gets too chilly. A spiraling walkway leads up/down around the building, complete with art exhibits and fun slides between each floor. There is also an interactive multimedia floor where you can fold your own paper cranes and add them to the 12-storey tall glass wall.

Entrance to the observation deck.

Open air deck that can get quite chilly. 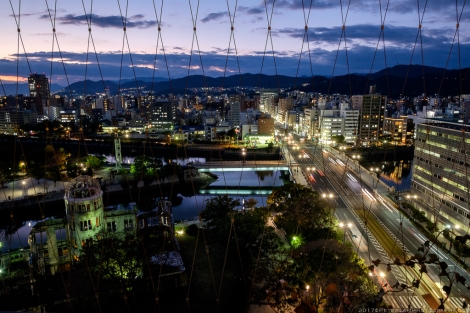 View of the T-shaped Aioi Bridge, the aiming point for the atom bomb because its shape was easily recognized from the air.

Views are best at sunset and dusk, but grab a blanket. 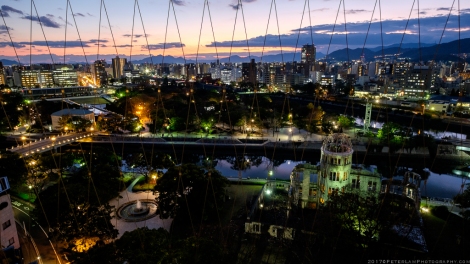 Aerial view of the Genbaku Dome and Peace Memorial Park.

Orizuru and a hope for peace. 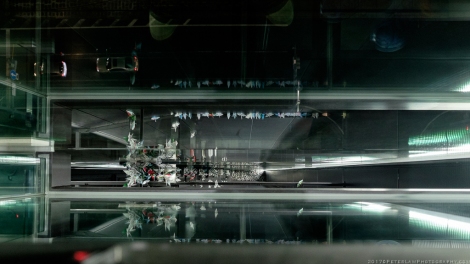 Fold a paper crane and do your part to fill the glass wall. It’ll take a million orizuru!

Down the spiral walkway. Or just take the slide.

Manga art exhibition along the spiral. 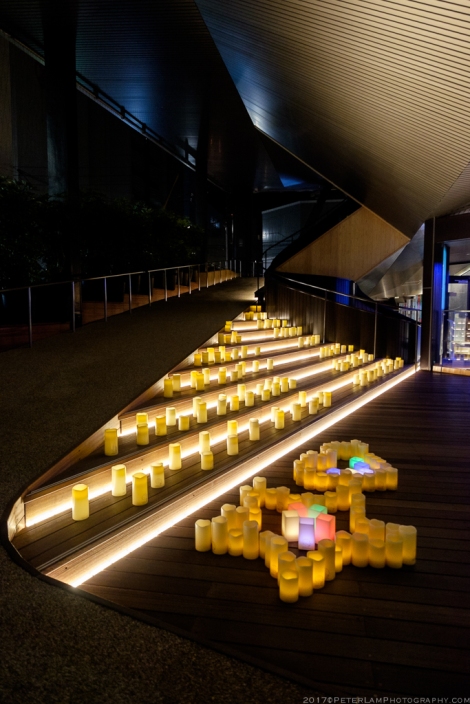 Great ambiance all around. Exit through the souvenir shop.

2 responses to “Hiroshima, the City of Peace”

© Peter Lam and Peter Lam Photography, 2013-2020. Unauthorized use and/or duplication of this material without express and written permission from this blog’s author and/or owner is strictly prohibited. Excerpts, images, and links may be used for personal and non-commercial use, provided that full and clear credit is given to Peter Lam and Peter Lam Photography with appropriate and specific direction to the original content. For commercial use of images, please feel free to contact me.
Loading Comments...
Comment
×
%d bloggers like this: