At 934m Lantau Peak is the highest point on the island, and the second tallest mountain in Hong Kong. During winter, the peak is often shrouded in cloud, and visibility is generally low due to fog and mist. Only Tai Mo Shan in the New Territories is taller, but the summit there is not publicly accessible due to the weather station at the top.

The name “Lantau” is actually derived from Cantonese for broken or rotten head (爛頭), a likely reference to the mountain’s characteristically weathered double-hump peak. Somehow this stuck as the English name, even though in Chinese the two peaks are separately named Fung Shan and Wong Shan, and combined as Fung Wong Shan (鳳凰山, literally Phoenix Mountain).

Lantau Peak as seen from Sunset Peak, which we hiked a few weeks earlier.

Whereas the nearby Sunset Peak is famed for its beautiful sunsets, Lantau Peak is a popular destination for catching the first light of the day. You can hike the mountain at any time, but a night trek culminating with sunrise at the peak is something extra special. I’ve been wanting to do this for some time now, and finally got the chance when the combination of clear weather, a public holiday, and willing hiking partners all came together over the Lunar New Year. What a great way to ring in the Year of the Monkey!

Section 3 of the Lantau Trail leads directly to the peak, traversing the mountain from east to west. We chose to start at the Pak Kung Au trailhead, which is a longer but more gradual climb to the top compared to the western ascent from Ngong Ping village. In fact, starting out at 2am ensured plenty of time to make it to the summit before sunrise at 7am.

Stopping at a viewpoint halfway to the top (and realizing we were way ahead of schedule), we spent an hour and a half enjoying tea, sausages and instant noodles with a great night view of Tung Chung town and the airport. There were a few other hikers there but otherwise we had the trail to ourselves.

The trailhead at Pak Kung Au, and the start of Lantau Trail Section 3.

On the way up, views of Tung Chung town to the north. 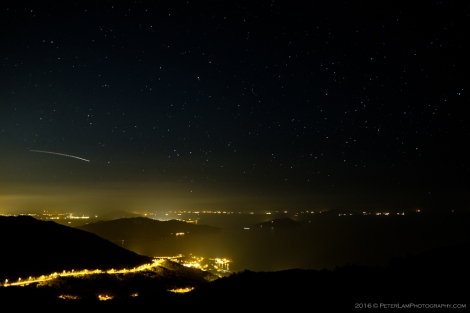 Mui Wo town and Silvermine Bay to the east. 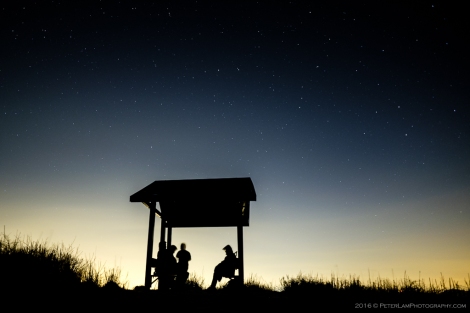 At a viewpoint midway to the top, we joined a few other hikers for a break. 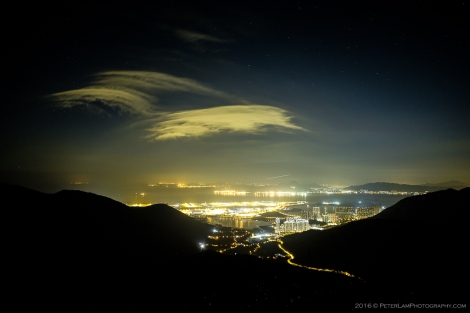 Great views of Tung Chung and the airport beyond. In the distance is Tuen Mun.

Sunrise at the peak

Resuming the trek after our snack break, we pushed on to the peak, taking our time to follow the well-defined path. It was starting to get cloudy and the wind had picked up, but it still made for an enjoyable hike. We reached the top at just after 6am, still mostly dark, and joined thirty-or-so other people already there waiting for the sunrise. We were glad we took a break lower on the mountain as it was quite cold and windy at the summit, and the small stone shelter was filled to capacity. There’s really no point in getting here any earlier.

The trail levels off before a steep climb to the peak. 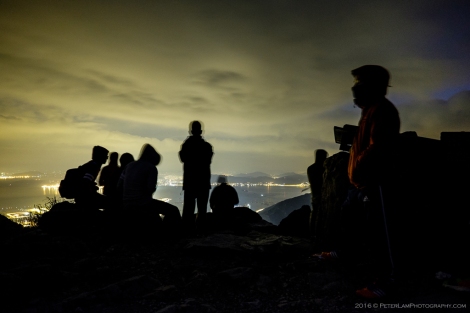 At the top! It was actually less crowded than expected. 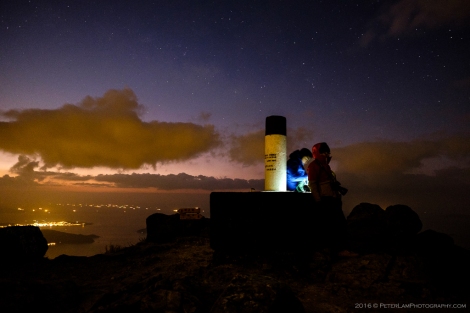 Everyone just hanging around waiting for the main event. 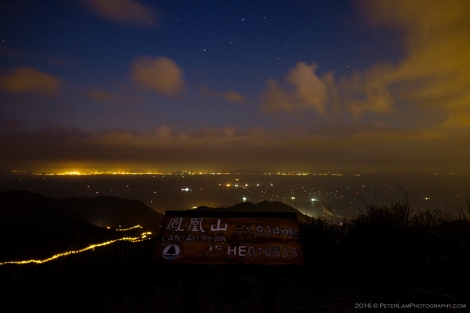 The official mountain plaque and a view to the west. Macau and Zhuhai in the distance. 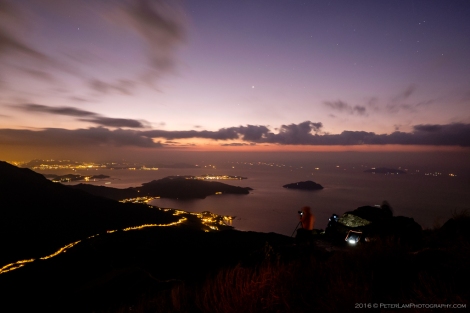 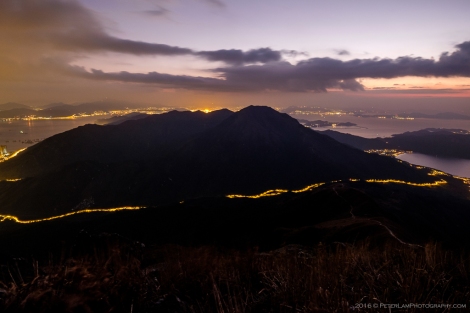 A look at Sunset Peak to the east. 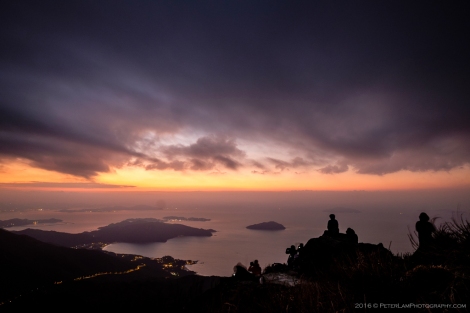 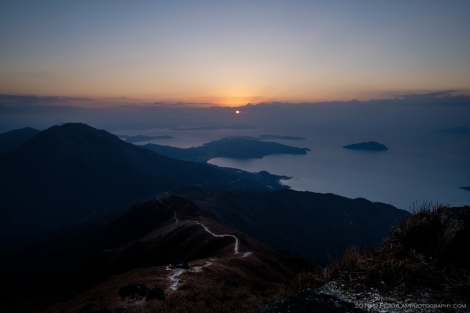 Sunrise finally, and our first view of the trail we took to get here. 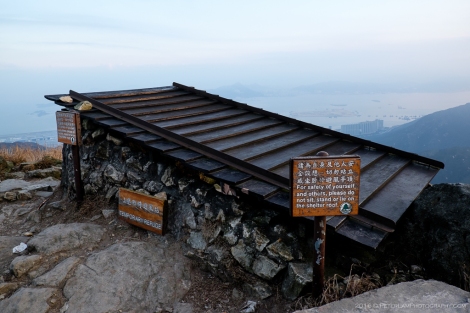 The shelter at the peak, which is very welcome in inclement weather.

Happy Year of the Monkey!

After basking in the first rays of the sun, we prepared for the descent down to Ngong Ping village via the western slope of Lantau Peak. This downhill section was quite steep and we had to be careful on the often huge stone steps. Don’t rush this part, especially after pulling an all-nighter on the trail! In the early light, views of the valleys down below were truly spectacular. At around 9am we completed the hike, reaching the Big Buddha and grabbing a taxi back to Tung Chung for a well-deserved nap. 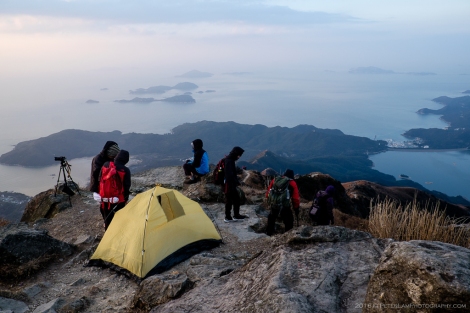 Some folks set up camp at the peak, but most took to the trail in early morning hours.

Spectacular views of the Shek Pik Reservoir below.

Trail marker on the Lantau Trail. Still 400m down before we reach Ngong Ping.

Endless steps down the western face of the mountain. 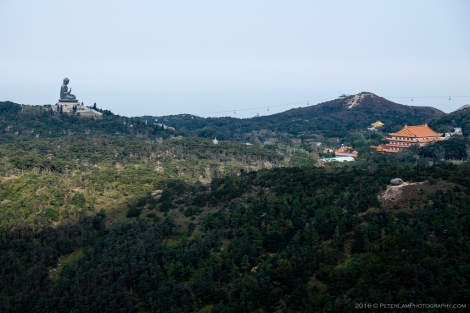 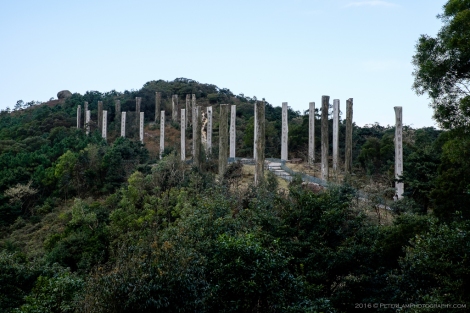 The Wisdom Path near the end of the trail.

Done! Looking back at Lantau Peak from the Sunrise Portal, and proud of our accomplishment.