While the Itsukushima Shrine is the main tourist draw to the “Shrine Island” Miyajima, there are lots of other attractions that make Itsukushima a popular destination. As a commuter ferry takes you on the short trip across Hiroshima Bay, you are welcomed by the Great Torii and a promise of many more discoveries to come. Go souvenir shopping at Miyajima town, visit the oldest temple complex on the island at Daishō-in, or head to the top of sacred Mount Misen.

Long regarded as an Island of Gods on the beautiful Seto Inland Sea, Miyajima has always been known for its virgin forests and ancient temples, a place steeped in history and tradition. It is best enjoyed by staying overnight (ideally in one of its ryokan, traditional Japanese inns) when the daytrippers have left and a peaceful calm blankets the island.

Stretching between the ferry pier and Itsukushima Shrine, a number of narrow streets and pathways make up old Miyajima town. On the main Omote-Sando shopping street, small shops line the intimate walkway selling everything from tacky souvenirs to traditional arts and crafts. Food is also central here, with many restaurants and snack stalls serving local delicacies (Hiroshima oysters are a favourite).

Explore the area in the evening for a completely different feel – as if transported back in time to the Japan of old. 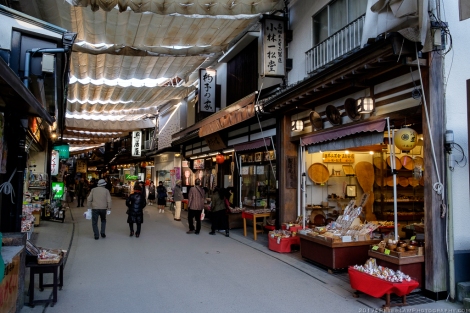 The pedestrian shopping street at the old town. Woodworking is a traditional craft here.

Grilled oysters, straight from Hiroshima Bay, are a local specialty.

It can get pretty crowded with day-trippers during peak hours, with the feel of a shopping arcade.

Senjokaku (Toyokuni Shrine), the largest structure on the island, next to the Five-storied Pagoda (Gojunoto).

As night falls, lanterns light the quiet streets of Miyajima. 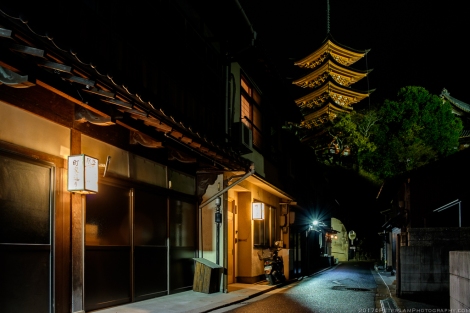 Behind Omote-Sando, Machiya Street is lined with art galleries and traditional tea houses.

Miyajima waterfront at dusk. Deer roam freely on the island and are very friendly! 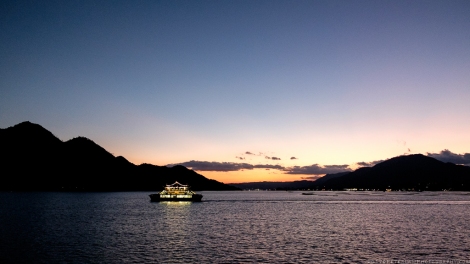 One of the two commuter ferry lines between Miyajima and the mainland.

A stone torii on the waterfront path that leads to Itsukushima Shrine.

Daishō-in (大聖院) is a Buddhist temple complex situated at the base of Mount Misen on the northern side of Miyajima. The oldest temple on the island, it is one of the most important sites of the Shingon Buddhism sect. A short walk away from the busier tourist sections of the old town, Daishō-in tends to be bit quieter and less visited than the more popular Itsukushima Shrine but is definitely worth the detour. The serene atmosphere of the many temples with abundant stone carvings and statues make for a welcome break from the crowds.

Spinning prayer wheels of sutra lead up the steps to the Daishō-in temple entrance.

One of the many stone statues at the temple. This fellow looks determined! 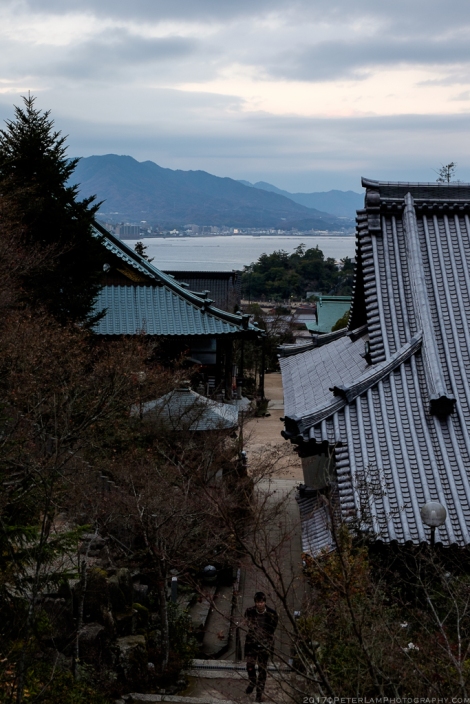 From the top of the temple complex, a view of Hiroshima Bay.

Inside the dimly lit Henjokutsu Cave.

All the stone statues, each unique, are lovingly dressed by their caretakers.

The highest point on Miyajima is Mount Misen (弥山). Considered a sacred mountain, you can reach its 535m summit via several trails from the village that wind through primeval forests, or take a scenic cable car. From the terminus, a short hiking loop leads to the top where an observation deck provides a 360-degree view of the mainland and Seto Inland Sea. Since ancient times, the mountain has been an important destination for religious visitors.

The Miyajime Ropeway to Mount Misen. Hiroshima City in the distance.

Near the peak, many old stone carvings and structures.

A dense primeval forest blankets most of the island. 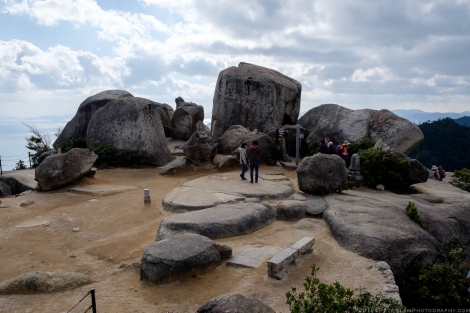 The summit of Mt. Misen.

Reikado Hall, the Eternal Fire Hall. Inside a holy flame has been burning continuously for over 1200 years, and was the pilot light for the Flame of Peace at Hiroshima’s Peace Memorial Park. 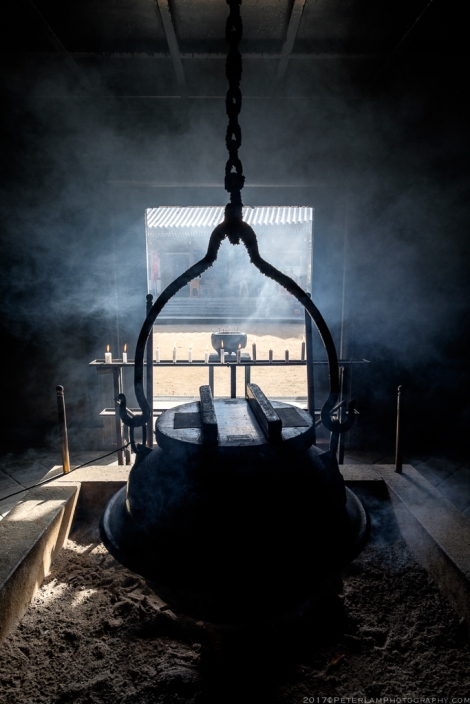 In Reikado Hall, the eternal flame boils holy water that is said to cure all diseases. You can drink from the cauldron.

Many many lovingly crafted statues.

Momijidani river and park near the valley at the foot of mount Misen.

One response to “Miyajima: A Visit to Shrine Island”