One of the most anticipated visits on my recent southern Japan tour was a trip to Hashima (端島), commonly known as Gunkanjima (軍艦島 – “Battleship Island”). Located some 15 kilometers south of the port city of Nagasaki, this tiny island is known for its surrounding seawall and abandoned concrete buildings, undisturbed except by nature for over 40 years. In popular culture it was featured as the villain’s lair in the recent James Bond movie Skyfall, and in 2015 was added to UNESCO’s World Heritage list as one of Japan’s sites of the Meiji Industrial Revolution: Iron and Steel, Shipbuilding and Coal Mining.

The island is noted for its undersea coal mines, established in 1887 by the Mitsubishi company, that played a key role in the rapid industrialization of Japan in the early 1900s. Four main mine shafts up to one kilometer deep were developed to extract coal from the seabed. The original size of the island was tripled through land reclamation, and a seawalls were built as protection from typhoons and rough seas, adding to the island’s unique ‘battleship’ profile.

To house the miners and their families, a maze of low- and high-rise concrete apartment buildings were built over the years – practically an entire city including schools, shops, restaurants, communal baths, and a town hall – linked together via narrow corridors and staircases. The population peaked in 1959, reaching over 5000 inhabitants, at the time making it the most densely populated place on earth.

Then, in 1974, with coal reserves nearly depleted and Japan’s increased reliance on petroleum-based fuel, the facility was closed. Almost overnight the miners and residents were vacated and Hashima became a ghost city, untouched for nearly four decades. Only recently have visitors been allowed to the island through guided tours, restricted to certain areas due to building safety.

There are currently five companies that offer tours of Hashima, one of them being the Gunkanjima Concierge Company that also operates a small museum related to the site. Located near the departure pier, a visit to the museum is a good way to get acquainted with the history of the island prior to your tour.

Through scale models, AV displays, and thousands of digitized photographs, the exhibits portray the daily life of the residents on Gunkanjima. The difficult working conditions of the miners are discussed, the role of the facility in the industrialization of the country, and the importance of preserving its heritage.

The island is also a reminder of its dark history as a site of forced labour in the period leading up to and during the Second World War, when Korean and Chinese labourers – essentially slaves – were made to work the mines. The museum itself paints a rather rosy picture of community life on the island, and (disappointingly) makes no mention of these controversial events, at least not in English. 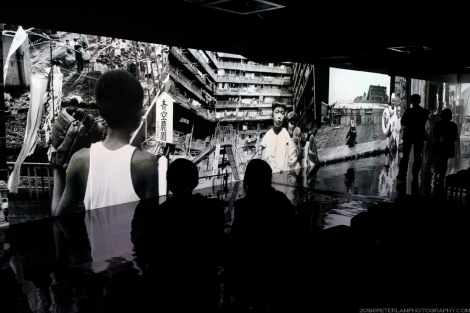 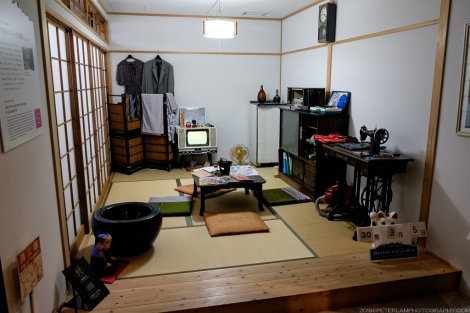 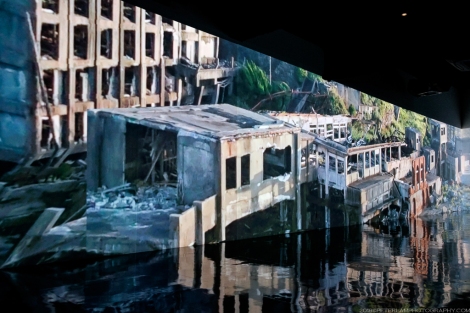 The trip out to Gunkanjima takes about 30 minutes, during which your Japanese-speaking guide (you can request an English audio guide) will cover some the historical highlights and interesting sites scattered around Nagasaki harbour, mainly related to its heavy industry and shipbuilding activities. Note that while the boat is in motion, you must remain seated… so if you want to take photos, be sure to get a window seat. I didn’t 😦 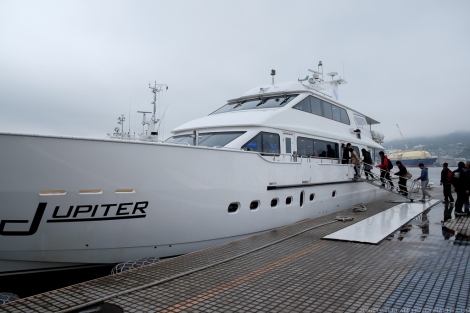 Also be aware that the waters can be quite rough near the island, often preventing boats from docking at the pier (apparently successful landings are at a low rate of only ~100 days per year). With high winds and stormy weather, the captain deemed it too risky to attempt a landing, so we went circled around the island instead. I may have been the only disappointed person on board, as everyone else seemed to be preoccupied with their seasick bags…

However, it’s just as well – access on the island is restricted to a pathway and three observation decks that are well away from the apartment blocks, due to the dangers of crumbling infrastructure. The only way to see most buildings is from the boat. Still, it would have been nice to actually set foot on the island.

Probably the best, and absolutely free, way to experience Gunkanjima is through recently released Google Streetview images. UK designer Brian James’ project Hashima Island: The Forgotten World overlays the images with historical information and a suitably gritty atmosphere. It’s almost as good as being there in person. 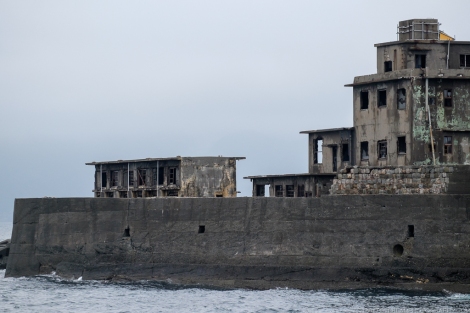 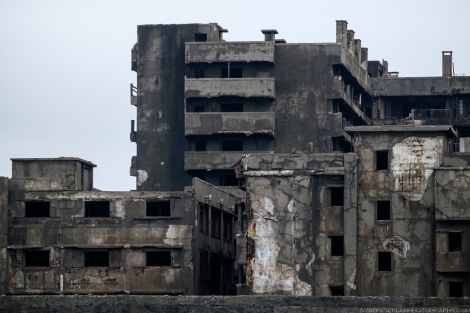 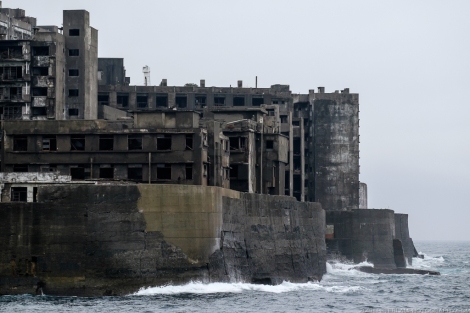 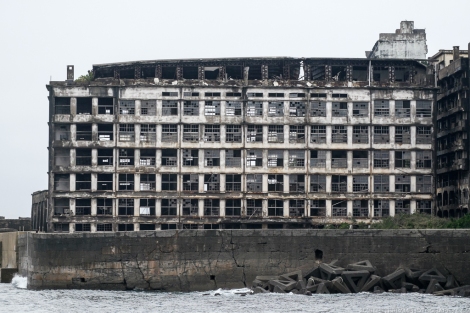 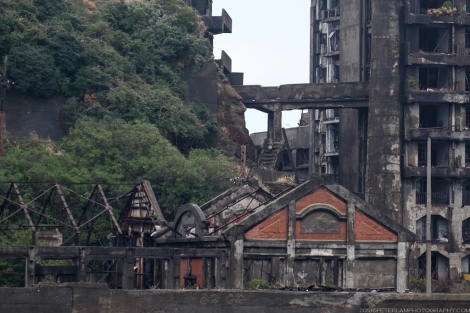