As night fell over Rearguard campsite we were all pretty tired from the Snowbird Pass hike, but while rest of the group went to sleep, Jeff and I were determined to take advantage of the clear skies for some night photography. The previous two nights on our hike had both been overcast and wet. We had carried our tripods with us, adding not insignificant weight and bulk to our packs, so this was our only chance to put them to good use. On the next day we would be heading back out of the park.

Click here for an outline of our Rocky Mountain adventure

We hoped to get some shots of the Milky Way, but that was not to be… The sun sets late after 10pm, and even at midnight the skies were still relatively bright. Add some haze and and a bright moon hiding behind the mountain, and all we could see were a handful of stars. However we were still able to get a few photos of Mount Robson and Berg Lake, and the surrounding areas. It’s incredible to see how the landscapes constantly change with different lighting conditions.

These shots were taken near the Rearguard and Berg Lake camp sites, close to the trail. We walked around one kilometer from our camp to the northern shore of Berg Lake. It was a windless and fairly chilly evening, completely peaceful after everyone had turned in for the night. The only sounds were of running streams nearby and the occasional cracking of the Berg Glacier calving into the lake. We stayed out for an hour or two, returning to our tents when it became too cold to continue – exhaustion was setting in, and we had a long day of hiking ahead of us.

Rearguard Mountain and Mount Robson viewed from our camp site.

Mount Robson reflected of the streams that feed Berg Lake.

The north western sky. Can you make out the Big Dipper? 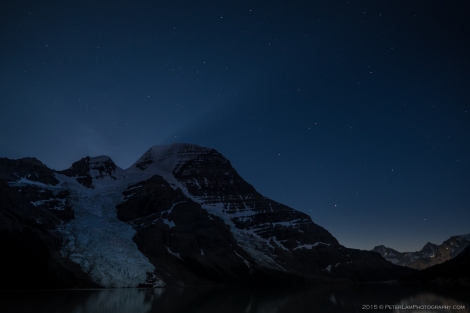 Mount Robson obscuring the bright moon low on the horizon.

One more of Mount Robson and the Berg Glacier, taken from the trail between Rearguard and Berg Lake camp sites.